We had heard about a mythical Twine Ball in a Weird Al Yankovic song and believe it or not, it actually exists! After spending a wonderful weekend with Michael, David, Wally, Lee Lee, Buddy & Sampson…we decided that we had driven more than 1,700 miles, we weren’t going to let a 65 mile “detour” stop us from seeing The Biggest Ball of Twine in all of it’s glory.

It weighs 17,400 pounds, is twelve feet in diameter, and was the creation of Francis A. Johnson. He started wrapping it in March of 1950 — four hours a day, every day. Francis lifted it with a crane to continue proper wrapping. For 39 years, this magnificent sphere evolved at Johnson’s farm, and eventually moved to a circular open air shed on his front lawn.
–Tim & Jamie (Darwin, MN)

We got up early this morning and looked out the window to see an inch of snow already on the ground. Turned on the news to see the worst morning news program ever to air. Eventually getting the info we needed, we headed out. The snow was drifting all over the road. No accumulation, but windy nonetheless.
We made some good time with Jamie driving in the morning. Saw our first triple-trailer UPS truck (it was like driving next to a small train).
When it was time to switch, we were looking for a place to stop so we pulled into Notre Dame. The wind was picking up and the snow was coming down a little heavier, but I was able to snap a pic of Touchdown Jesus (above). I took over the driving and things were getting a little easier. Quite a few trucks travel this way and we saw a couple of accidents (one of them had a 6-mile backup!)
Apart from the fact that we already made it to another time zone and we hadn’t eaten a thing since 7 in the morning. Jamie wanted to stop at a deep dish pizza joint called Minetti’s that she saw on Anthony Bourdain’s “No Reservations”. We put it into the GPS and it couldn’t find anything by that name. Admitting defeat, Howard and the interwebs came to the rescue. The place was called Burt’s Place. Minetti’s…Burt’s Place…same thing. Dropped the address in our GPS and we were on our way to a nice sit-down lunch at a place we saw on TV…or so we thought. We found the place no problem. It was 1 o’clock and we were starving. Got into the restaurant, sat ourselves, and Burt’s wife came in and asked if we called ahead.

Twenty minutes went by. We read the paper. Looked at the old radios and other memorabilia that adorned the walls. Think Applebees, but authentic. The pizza came out hot, fresh and in a bag. We drove about a mile down the road to get some bubble tea. So, we sat in the parking lot and ate the pizza. BTW, the pizza was pretty good!
The weather was pretty good too. So we decided to take advantage of the good weather and move past Madison, WI (told you there was nothing good there). We ended up in Wisconsin Dells, WI. A popular spot with the casino crowd, Ho-Chunk Casino is nearby. Some other resort-like places, but that seems to be about it.

Why Ohio Sucks…We have travelled almost 1,200 miles in 3 days through 7 states. Ohio is the only one that doesn’t take EZ-PASS! I would understand if they had their own system for taking tolls, but they don’t. You have to stop and get a ticket. When you pay, you’re conversing with someone with a heartbeat! There is one reason why Ohio doesn’t suck…this lovely pic we snapped in Bryan, OH.

Woke up this morning in the glorious metropolis of G’Ville, NY. Had a wonderful breakfast of “Nutless” Egg Sandwiches prepared by Chef Howard. Checking the weather forecast, it looked like we were in for a storm that wrapped from Chicago all the way to Boston. Lo and behold, weather forecasters were wrong again, fancy that ?!?!?

The ride was uneventful. Had some drifty snow going through Rochester, but nothing more than that. We stopped in Buffalo for a bite. We didn’t want to hit any of the tourist traps like The Anchor Bar, so we opted for the Arby’s at the Walden Galleria Mall.

We headed out after walking around the mall for a little bit and noticed that we needed to get gas. There in the distance, shone a beacon of hope to fill our tank, a plethora of petroleum, a bastion known as:

?????…We didn’t really stop there, but we thought it was funny to find a place where you could theoretically, lube up your insides and your car at the same time.

As we were passing Cleveland on our way to Elyria, OH…we wanted to stop in at the Rock n’ Roll Hall Of Fame & Museum. We put the address into LisaLisa (no Cult Jam) and she told us that we were only 15 minutes away. When we arrived at the building (I M Pei design, BTW) we looked around for parking and a sign said that we could park at the adjacent Science Center/Cleveland Browns Stadium. Not wanting to pay for parking, we made an illegal u-turn and parked at a parking meter that swallowed 2 bucks in quarters. Walking around the museum was really cool. We got to see a lot of memorabilia that you don’t see in The Hard Rock Cafe. Mostly clothing and hand-written lyrics. Some of the neater things were the rejection letters from record companies that U2 got and 1 of the 2 reel-ro-reel machines that was used to record The Beatles’ “Sgt. Pepper” album.

We went to the gift shop and bought a sticker for our table, after that we headed on to Elyria, OH, where our lodging for the night was to be. The room is nice. It has a microwave, a refrigerator, a bed and the usual things that a hotel room would have. Dinner was a treat as we went to Bob Evans. With the millions of dollars that they spent on the print marketing of their latest mastication…the Bob-Burrito, how was I to refuse? Imagine a “meat-lovers omelette” hugged by a warm flour tortilla…not suitable for driving, but you can operate heavy machinery after consuming. We capped the night off with some delicious pie.

Catch our next post and we’ll tell you why there’s absolutely nothing to do in Madison, WI. 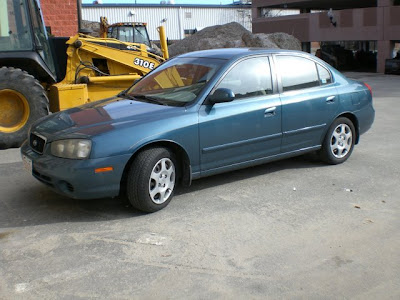 Today was a sad day, for today was the day I sold my car. My little Elantra was a good, sturdy car. Whether I was driving the Garden State Parkway, the New York Thruway or the Mass Pike it never steered me wrong. Yes there was that one time when you broke your nose at the gym, it was tough but we made it through together. You were a noble steed and come your 8th birthday in May, even though I will be 3,000 miles away from you (most likely riding the bus), I will think of you fondly and hope that your new driver appreciates you as much as I did. Oh my little blue/green Elantra, you will be missed.

According to Google, it’s 3,067 miles and 47 hours of actual driving time. Broken down, if you spent the same amount of time sitting in front of the TV as we did sitting in the driver’s seat…you would burn enough calories for 5 Double-Whoppers with cheese and a large order of fries.

This is not much different than what our second bedroom usually looks like. :o)

This is the “closet” for the next few weeks.

So many boxes!!! When did we get all this stuff?
You’d think that after moving as many times as we have (this being our 7th), maybe it would get easier. No, packing still stinks big time.

As you may know by now, Tim and I are moving across this fine country of ours to the Emerald City a.k.a Seattle. We started this blog as a way to keep in touch with everyone, let you know of our shenanigans along the way, and basically just share this adventure with us. If you know of any cheesy roadside attractions along I-90 please share and you may see pictures of it posted here, along with our smiling faces of course.